Requirements for the degree: 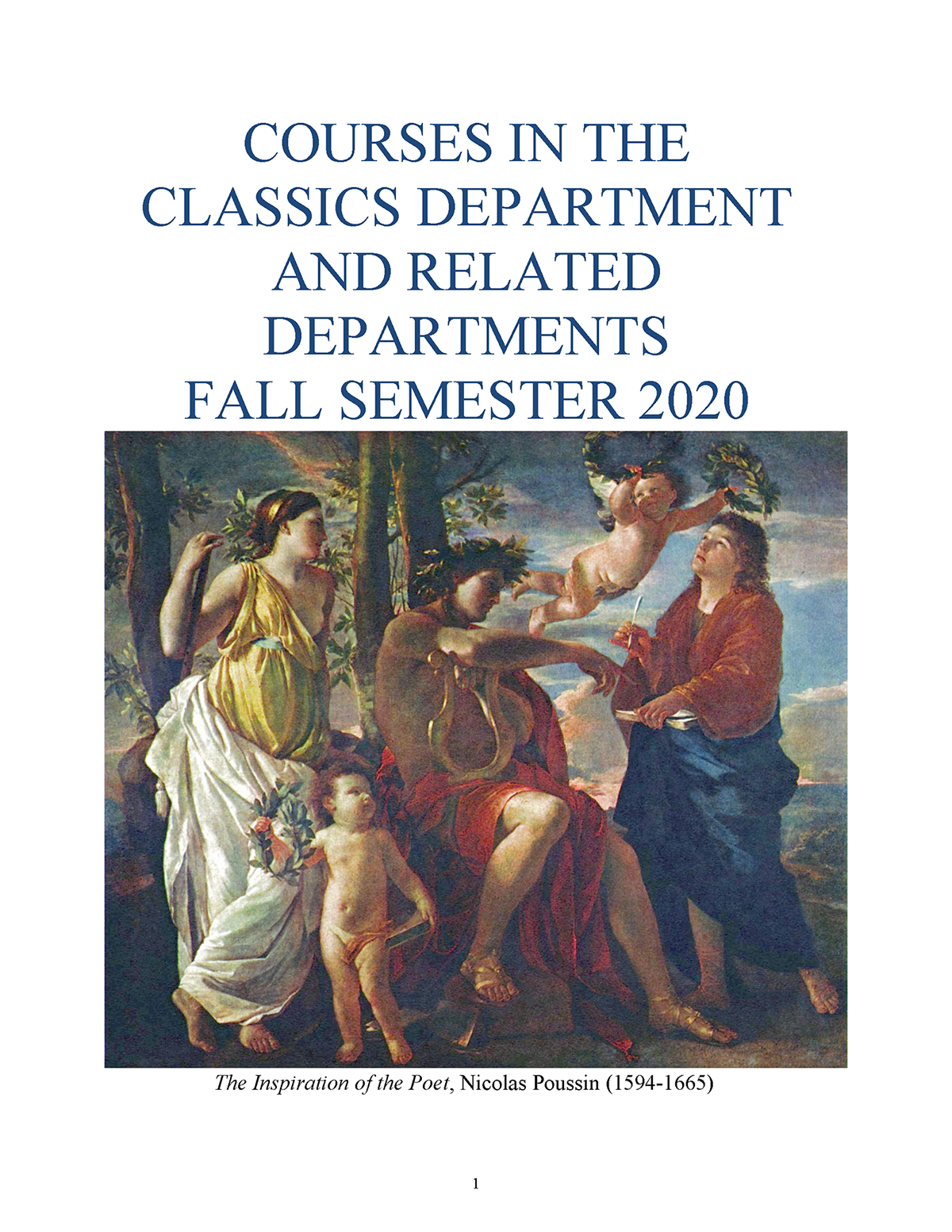 Take a Look at the Fall 2020 Course Catalog

All degree candidates are also required to take Latin 472/672, The History and Development of the Latin Language, and two of the Latin courses which survey a major period of literary history (e.g., Archaic Latin, the Age of Caesar, the Augustan Age, and Silver Latin).  Students concentrating in both Latin and Greek are also required to take Greek 472/672, The History and Development of the Greek Language.  We strongly recommend our course on Latin pedagogy, which pairs students with experienced Latin teacher-mentors and includes units on learning styles, standards for Latin teacher certification, and the incorporation of Greek and Roman culture and gendered perspectives in the classroom.  Students are also encouraged to take at least three courses focused on individual authors and literary genres.  In recent years these courses have included Homer’s Iliad and Odyssey, tragedy, and Herodotus and Thucydides on the Greek side, and on the Roman side Lucretius, Catullus and Roman elegy, Ovid, Roman historiography, Roman satire, and Vergil’s Aeneid.  Graduate students may also take one or two of our department’s advanced classical humanities courses in English translation, which have proven beneficial to those planning to teach at the secondary or university level.  These courses in translation include Advanced Classical Mythology, The Classical Tradition in America, and a new capstone seminar, Classical Connections, comparing central aspects of both Greek and Roman culture and requiring substantial student research.

In 2014, the Department revised the assessments required for the M.A. degree.  The new assessments, described below, are designed to test and hone skills developed in the course of the program.

A language proficiency exam assesses the comprehension of language and the ability to express that comprehension through translation, grammatical analysis, and grasp of subject matter.  The exam presents students with a pair of passages, one of poetry and the other of prose, and asks them to do several things within a defined timeframe:

Our program aims to teach students about research methods in our field.  We want students to know where to find information, how to process and assess it; we also want them, as a prelude to their own scholarly contributions to research, to be able to assess the assumptions, methodology, conclusions and implications of published, peer-reviewed scholarly research.  To measure these skills, we give students a scholarly article and ask them to write an analysis of it over the period of approximately one week.  The analysis is to include:

Students are asked to prepare a commentary on a passage of  Latin from a major Latin author and are given one week in which to do so.  The commentary is to include an introduction to the passage, which places it in a literary and cultural context, discusses the author and the genre, and describes the interpretive issues which the passage raises.  As part of their work on this commentary students are asked to identify five of the most important scholarly contributions to the elucidation of the passage and to use these works in annotating the passage.  Comments, keyed to lines and words in the passage, are to address all of the following: language, vocabulary, meter, textual emendations, intertextuality, themes, literary devices and issues which arise from particular theoretical approaches to the passage.  The final commentary is to be presented in written form with the full text followed by comments.

It is normal practice that students complete a research paper in each of their graduate courses.  We now ask students, in their first semester with us, to identify a special field within our discipline which will be the focus of some of their work: for example, art and archaeology, the classical tradition, gender studies, or historical linguistics.   In order to foster greater coherence in each student’s program and to develop research skills, we ask each student to build on a paper from one of their courses which reflects their special field of interest and which they can further develop in light of other coursework in the program.  This revised and augmented paper is to be submitted for our assessment and each student is to make a presentation about it as part of a research conference we hold each spring.  Students have twenty minutes in which to present their papers (a common length at professional conferences) and then ten minutes to answer questions from faculty, other students, and guests.  The conference is intended to promote research skills and to celebrate them at the end of the students’ graduate program.

For a description of the official degree requirements, please see the Classics page in the current graduate catalog, at http://apps.gradschool.umd.edu/catalog/programs/clas.htm.