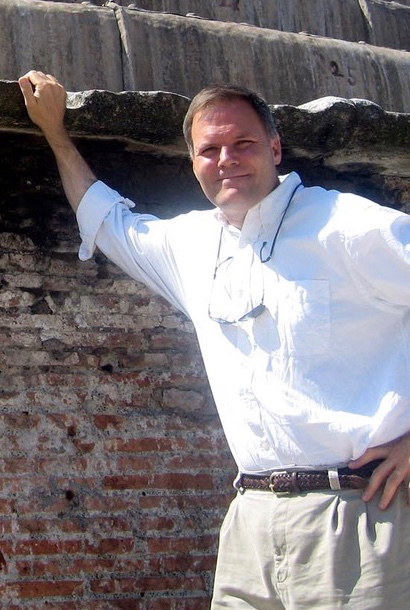 Gregory S. Bucher, a native of California, followed his wife, Christina Clark, as she became A&S Dean at Marymount University in Summer 2016. He returns to the DMV after a 15-year sojourn in Omaha, NE, where he was most recently Professor of Classical and Near Eastern Studies at Creighton University.

His research centers on Roman topics, especially in the areas of historiography and art history. He is probably best known for his series of studies on Appian of Alexandria, a Greek-speaking historian of Rome. See, for example, his "Origins, Program, and Composition of Appian's Roman History" (TAPA 130 [2000]), his "Fictive Elements in Appian's Pharsalus Narrative" (Phoenix 59 [2005]), and his "Toward a Literary Evaluation of Appian's Civil Wars, Book I," in The Blackwell Companion to Greek and Roman Historiography (Oxford, Basil Blackwell: 2007), edited by John Marincola. He has published many Roman-era entries for the Brill's New Jacoby project.

Much of his research has been carried out with students he has mentored, including the members of an undergraduate research group he established at Creighton. Together and separately they have earned numerous grants and awards for their research, and his students have routinely presented their work publicly both in Omaha and nationally. With a student he organized a grant-winning symposium at Creighton, "The Good, the Bad, and the Altered: toward a method of identifying recut and typologically irregular Roman imperial portraits" (2009), as well as several internship programs.

Publications that have emerged from his collaborative work include "The 'Joslyn Augustus' and the 'Good, Bad, and Altered' Symposium at Creighton University," with Meghan C. Freeman, MAAR 55 (2011): 1-14;  "When the Passion has Cooled: Reflections on Mel Gibson's Passion," with B. Barrett and M. Dawson, JRS 6 (2004); and a series of articles on Early Modern Anatomists with Dr. Daniel Lydiatt, M.D., such as "The Historical Evolution of the Understanding of the Submandibular and Sublingual Salivary Glands" (CA 25 (2012) 2-11).

His strong support for student research led to his serving as Managing Editor of the peer-reviewed Quest: A Journal of Undergraduate Research (published at Creighton).  He edited volume 5, formed an editorial board, secured ISBN recognition, and transitioned the journal to on-line format. His strong support for the public dissemination of knowledge led to his organizing the grant-winning CU@Joslyn lecture series (2004-) for Creighton faculty to give public lectures at the Joslyn Art Museum and the Charles L. Babcock Lecture Series (2011-) for American Academy in Rome predocs to give lectures at the Intercollegiate Center.

He has also published on Architecture ("Re-styling Tradition," First Things (2015)) and film ("A Complex Oedipus: The Tragedy of Edward Morbius," in The Classical Tradition in Science Fiction (Oxford, OUP: 2015), edited by B. Rogers and B. Stevens). His co-organized exhibition: An Archaeologist's Eye: The Parthenon Drawings of Kathryn A. Schwab, for which he co-edited the catalog, is currently on tour in the United States.

His award-winning teaching tends to mirror his research focus on Rome. Recent upper-division courses include Roman Topography, Roman Law, Early Rome, and Early Christian Art, as well as numerous courses in Greek and Latin. Extensive teaching abroad, including three years at the Intercollegiate Center for Classical Studies in Rome (most recently as the Andrew. W. Mellon Professor in Charge in 2011-12) and a three-year term as the Director of the Classical Summer School of the American Academy in Rome (2008-10) led to his being elected to the Managing Committee of the Intercollegiate Center and then to a five-year term as the Committee's chair, now in its second year.